Driving through areas of the United States like Amish Country in Lancaster, Pennsylvania, it’s typical to see the simple yet iconic Amish beard.

Though it may be a less common men’s beard style, the Amish men value their beard tradition. Read more about their unique culture and facial hair style.

What is an Amish Beard?

An Amish Beard is a traditional beard without mustache style common among members of the Old Order Amish community. Amish men typically grow the beard only style out after they marry.

The beard grows thick and to several inches long. It comprises several dense, curly clusters that are typically left untrimmed growing on the chin and jawline, then typically connects to sideburns.

Why Do Amish Have Beards?

The beard is important to the Amish culture, their religious beliefs, and a sign an Amish male has become a man. For Amish men, longer beards represent a milestone in manhood. It’s also a symbol of being ready for marriage.

The beard is also believed to help protect against wind and weather damage, as well as offer physical protection during horse riding and other outdoor activities.

Mennonite or Amish culture is almost defined by their fashion, facial hair, and hairstyles. Amish men have long beards like ZZ Top, but they don’t grow mustaches. For men in this community, growing a beard is living by the Bible.

Amish beards are grown long and thick, but you won’t see a mustache on any Mennonite. Ancestors forbid members from growing mustaches as part of a pacifist tradition to protest war and the military. There are also restrictions on when Amish men can start growing a beard.

To understand how Amish look at facial hair, it’s important to jump back in history and also consider that Amish treat beards as a sign of manhood. Find out why Amish grow their beards so long and connect to sideburns along with related styles.

According to Mennonite tradition, men who have long beards reveal their humility. A young man with a short beard doesn’t have the same life experience as an Amish man with a foot-long yeard beard.

In fact, Amish men and women don’t exchange wedding rings. Instead, men stop shaving forever as a sign of commitment to their wives.

Devout Amish never grow mustaches. It’s an ancient part of the Mennonite tradition as a protest against the military and war.

It’s done as a sign of “non-resistance” and rejection of violence. However, in the 1800s, British troops were required to wear some facial hair on the upper lip.

Amish prefer the term non-resistance to pacifism as they try to avoid confrontation in every aspect of life, not just war.

This tactic eventually changed by the time soldiers had to wear sealed gas masks in World War I, but Mennonites rebelled by growing beards and shaving their lips.

Growing a beard and styling your hair the Amish way also involves your dedication to God. There’s a particular scripture that the Amish refer to:

It’s typical in Mennonite culture to view mustaches as a sign of vanity.

When studying the Amish beard, you should note the shape and length first, but there are several ways that these men style their facial hair to distinguish themselves.

Look at some long beard styles below to see unique features:

Long hair and beards are important symbols to the Amish, and they require men to grow long beards.

However, until an Amish man gets married, he can shave and trim his beard hair. However, once you tie the knot in Amish tradition, you cannot cut your hair as a woman nor shave your beard as a man.

Amish tradition requires you to shave your mustache, and in more traditional circles, you also shave under your bottom lip and cheeks.

The most traditional Amish facial hairstyles feature a beard that connects to sideburns and grows in thick along the jaw and chin, but everything else is clean-shaven.

Honest Amish is a beard brand that sells beard care products. Honest Amish beard oil is their most popular item, and it contains over 7 different essential oils, some of which are helpful for hair growth. 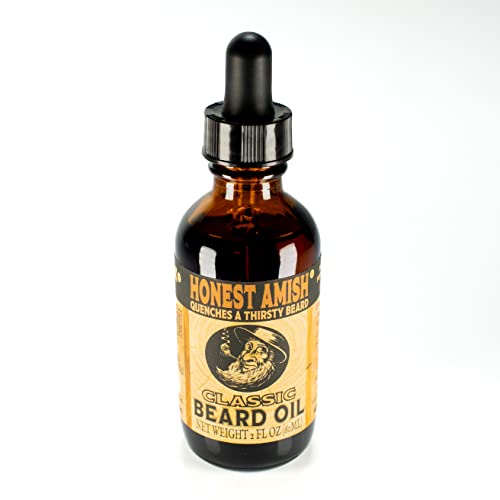 Since beard oil conditions and moisturizes hair follicles, adding a beard oil into your routine can promote stronger, healthier hair.

Does it always help with hair growth? This would depend on whether dry skin under the beard and beard itch are causing stress to your follicles. If genetics are the root cause of hair growth problems, beard oil may not improve growth overall unless using a beard growth oil.

You can find our top picks in this beard oil guide, and what to look for when purchasing a beard oil for your skin and hair type.

However, we’ve tried Honest Amish beard oil and think it’s an amazing product. It’s light in texture and doesn’t overpower your nostrils either. We suggest using this beard oil every day for softer-looking, glossy beard hair.

View all of Eric Melillo's posts.